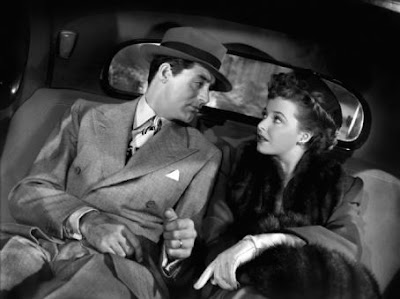 A night watchman stops and talks to a sailor who has rowed up to the dock from the fog. The sailor then stops him from questioning a lonely young woman who seems to be waiting for someone. The story now begins in a flashback:

Gambler Joe "the Greek" Adams, has a couple of problems. First, he and his friend Zepp have received draft notices to join the army to fight in World War II. One of his other friends, Joe Bascopolous, who has just died had been declared unfit to serve. So, one of them can dodge the draft by taking his identity. They gamble for it and Joe wins.

The next problem is, he does not have the money for his gambling ship. He comes up with an idea to run a "charity" casino, despite the suspicions of socialite, Dorothy Bryant.

Eventually, Joe wins her over by teaching her, Australian rhyming slang, for example "tit for tat" (hat), "twist and twirl" (girl), and "trouble and strife" (wife). Later, he renames his gambling ship in her honor.

On the day of the charity ball, Joe receives a letter addressed to Bascopolous, written in Greek. Curious, he takes the letter to a Greek Orthodox priest for translation. It turns out to be from Bascopolou's mother, who wrote to tell her son about Germans invading their village.

At the charity ball, Joe's men come up with a plan to steal the money. Joe has a change of heart and tells "Crunk", that all the money is going to war relief. But Zepp, overhears what he says and forces him at gunpoint to keep the money. Dorothy, catches them red handed and to protect her, he knocks her out. Joe, then kills Zepp, but.. not before getting himself shot and escapes through a window.

Joe, sends the money back to Dorothy, then loads up his ship with war relief supplies.

Later, Dorothy is shocked when a policeman informs her that Bascopolous is dead. Then she sees the photograph of the dead man and it isn't Joe. When the name of the ship Bascopolous is mentioned, she knows where to find him. She rushes to the dock, just as the ship is leaving for Europe. She begs Joe to take her with him, but he turns away. The ship, is torpedoed and sunk on the return trip. Dorothy visits the dock each night, waiting for her Joe to return. 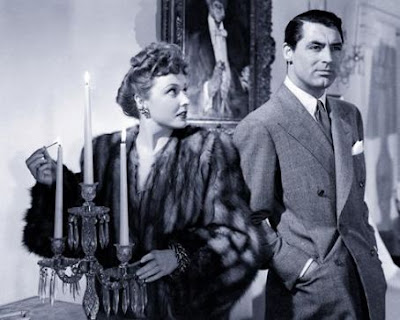 Writer Milton Holmes said that his story was inspired by a real 1936 event, where a nightclub owner staged a one-night gambling benefit at the Beverly Hills Hotel to raise $40,000 for a church. In his original story, the character of Joe dies at the end.

I really wanted to see a noir type movie with Cary Grant, starring in it. It is hard at first to see Grant play a heartless gambler, but.. he plays the part perfectly. The love story maybe a little fluffy at times, for a film noir, but.. it was still enjoyable to watch. 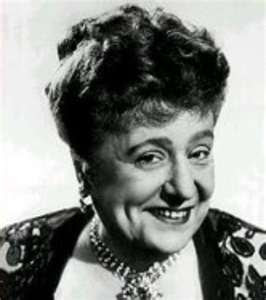 In 1939 she was introduced to Alfred Hitchcock, who cast her in her first major screen role, Mrs. Van Hopper, in Rebecca.

Bates performed in more than sixty films over the next thirteen years. Among her credits are Kitty Foyle, The Moon and Sixpence, Mr. Lucky, Heaven Can Wait, Mister Big, Since You Went Away, Kismet, Saratoga Trunk, The Secret Life of Walter Mitty, Winter Meeting, I Remember Mama, Portrait of Jennie, A Letter to Three Wives, On the Town, and Les Misérables.
Posted by Dawn at 1:36 PM