We are so happy that Robert Osborne is back on TCM. 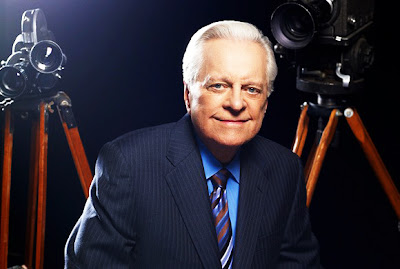 Robert Osborne (born May 3, 1932), actor and film historian best known as host for Turner Classic Movies is coming back from a 5 month break, looking like he is feeling much better .. Osborne graduated from the University of Washington's School of Journalism. He began his career working as a contract actor for Desi Arnaz and Lucille Ball's Desilu Studios. One of Osborne's early television appearances was in 1959 on an episode of Westinghouse Desilu Playhouse called "Chain of Command". He was also featured on the special Christmas Day Desilu Playhouse show "The Desilu Revue". He had small roles in TV shows: The Californians and in the pilot episode of The Beverly Hillbillies.

Ball suggested that Osborne combine his love of film and journalism. Osborne took her advice, while continuing acting in small parts.

Osborne was a columnist for The Hollywood Reporter from 1982 to 2009. Osborne wrote the book, 80 Years of the Oscar: The Official History of the Academy Awards. Between 1986 and 1993, Osborne was the host for, The Movie Channel. In 1994, he moved to TCM, where he hosted prime time movies, "Private Screenings" and "The Essentials".

Osborne, has also participated in the Paley Center for Media in New York City celebrating the television careers of Lucille Ball and Cloris Leachman. He recently was moderator at Paley, celebrating the 100th birthday of Academy Award-winning songwriter Johnny Mercer.

Osborne also hosts the annual Robert Osborne's Classic Film Festival in Athens, Georgia. It began in 2005. The non-profit event is held by the University of Georgia’s Grady College of Journalism and Mass Communication. In 2010 he hosted the very first TCM Classic Film Festival. The 2011 Film Festival takes place April 28 to May 1 in Hollywood.
Posted by Dawn at 5:22 AM