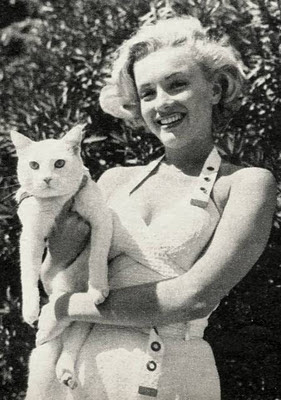 Muggsie: Jim Dougherty bought his wife a pet collie named Muggsie. However, after she began her modeling career, Norma Jeane had less time for her dog.

A Chihuahua: At the time she was signed by Columbia Pictures in 1948, Marilyn Monroe owned a pet Chihuahua.

Mitsou: Mitsou was a white Persian cat that Marilyn Monroe owned in New York in the mid 1950s.

Hugo: A basset hound who lived with MM and Arthur Miller at their apartment in New York.

Maf: Maf was a little white French poodle who was given to MM in New York by Frank Sinatra. Sinatra had purchased the dog from Natalie Wood's mother. As has been widely reported, Marilyn named the dog "Maf" because of Frank Sinatra's alleged mafia connections. lnterestingly, to spite Arthur Miller, Marilyn used to let Maf sleep on an expensive white beaver coat that Miller had presented her. When Marilyn returned to live in Hollywood, she had Maf flown back to be with her. Following her death, Maf was inherited by Frank Sinatra's secretary, Gloria Lovell. 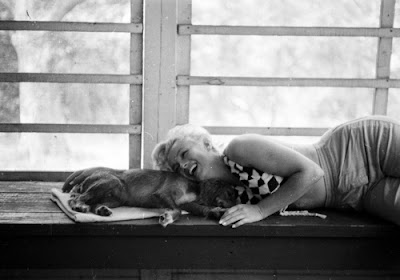