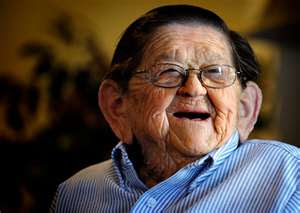 Karl Slover (September 21, 1918 – November 15, 2011) was a Slovak-born American actor and was one of four surviving munchkins from the film, The Wizard of Oz.(1939). A lifelong bachelor, Slover lived in Dublin, Georgia until his death at 93.

At the the age of 9 years old, Slover's father, sent him to Berlin, Germany to join up with a traveling midget show. After working with the show for several years, Slover moved to the United States where he joined another traveling show. It wasn't long before Slover began appearing as midgets in films: The Terror of Tiny Town, Block-Heads, Bringing Up Baby and They Gave Him a Gun.

Slover was working in Hawaii when his circus manager sent him to Hollywood, where "little people" were needed for an upcoming film called The Wizard of Oz. At the age of 21 and standing just 4 feet 4 inches (making him the smallest of the Munchkins), Slover played the parts of four munchkins in the movie: the first trumpeter, a soldier, one of the sleepy heads, and was among those who sang 'Follow the Yellow Brick Road'.


After filming 'Oz', Slover began working for the 'Original World Famous Singers Midget Show' where he sang and danced throughout the United States. When the show ended in 1942, Slover joined the Royal American Carnival in Tampa, Florida. 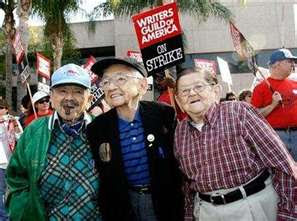 Slover, participated in several celebrations related to the Wizard of Oz. Every June, Slover attended festivities celebrating Judy Garland's birthday at the Judy Garland Museum and Birthplace in Grand Rapids, Minnesota. In November 2007, Slover joined seven other surviving munchkins in Hollywood where honorary mayor Johnny Grant unveiled a star dedicated to the munchkins on the Hollywood Walk of Fame. 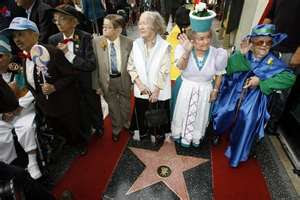 Email ThisBlogThis!Share to TwitterShare to FacebookShare to Pinterest
Labels: in memory(2011), karl slover, the wizard of oz(1939)