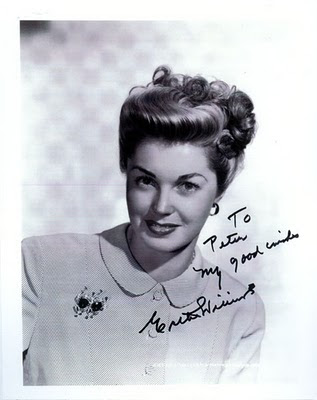 I'm sure most of you know by now... I'm a huge Esther Williams(pictured above) fan and I'm thrilled that she will be TCM's Star of the Month coming in May. Esther Williams, is a competitive swimmer and 1940s and 1950s movie star. Known as "America's Mermaid," she was famous for her musical films that featured elaborate performances with swimming, diving and "water ballet," which is now known as synchronized swimming.

Happy Birthday: Glenn Ford (May 1, 1916 – August 30, 2006). Had a career that spanned seven decades. Despite his versatility, Ford was best known for playing ordinary men in unusual circumstances.

Happy Birthday: Bing Crosby! (May 3, 1903 – October 14, 1977). was a singer and actor. Crosby's trademark bass-baritone voice made him one of the best-selling recording artists of the 20th century.

Happy Birthday: Audrey Hepburn! (4 May 1929 – 20 January 1993) was a British actress and humanitarian. Although modest about her acting ability, Hepburn remains one of the world's most famous actresses of all time who is remembered as a film and fashion icon of the twentieth century.

Happy Birthday: Alice Faye! (May 5, 1915 – May 9, 1998) was a actress and singer, called by the New York Times "one of the few movie stars to walk away from stardom at the peak of her career." She is remembered first for her stardom at 20th Century Fox and, later, as the radio comedy partner of her husband, bandleader-comedian Phil Harris. She is also often associated with the Academy Award–winning standard, "You'll Never Know", which she introduced in the 1943 musical, Hello, Frisco, Hello.

Happy Birthday: Tyrone Power! (May 5, 1914 – November 15, 1958), was a film and stage actor who appeared in dozens of films from the 1930s to the 1950s, often in swashbuckler roles or romantic leads such as in The Mark of Zorro, Blood and Sand, The Black Swan, Prince of Foxes, The Black Rose, and Captain from Castile.

Happy Birthday: Gary Cooper! (May 7, 1901 – May 13, 1961), was renowned for his quiet, understated acting style and his stoic, individualistic, emotionally restrained, but at times intense screen persona, which was particularly well suited to the many Westerns he made. His career spanned from 1925 until shortly before his death, and comprised more than one hundred films.

A new feature here at N and CF will be... "Article of the week". I will pick a particular article that caught my eye. My first pick will be from the blog: Thrilling Days of Yesteryear. Reviewing the film" Gun Crazy".

Fun Facts from:
IMDb
TCM
Posted by Dawn at 6:01 AM