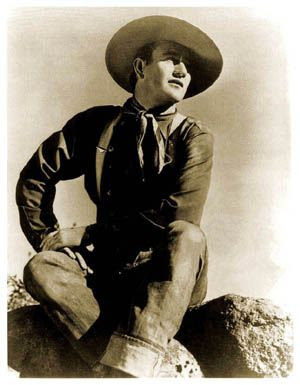 His last film was The Shootist (1976), whose main character, J. B. Books, was dying of cancer—the illness to which Wayne himself succumbed 3 years later. It was based on the 1975 novel of the same name by Glendon Swarthout Scott Hale and Miles Hood Swarthout (son of the author) wrote the screenplay. Lauren Bacall, Ron Howard and James Stewart co-starred and Don Siegel directed.

The movie begins with a clip montage of some of John Wayne's earlier western movies, showing the life of the "shootist" John Bernard (J. B.) Books.

Books arrives in Carson City, Nevada on January 22, 1901, looking for the medical opinion E. W. "Doc" Hostetler. Hostetler confirms a Colorado doctor's prognosis of cancer, so Books rents a room from the widow Bond Rogers and her son Gillom.

Marshal Walter Thibido, hot on his heels, visits the house to tell him to leave town. Books tells him about his cancer. The Marshal then tells him, "Don't take too long to die."

Old enemies and glory seekers come looking for him. Mike Sweeney wants to avenge a brother's death. A newspaperman wants the story of his life. Books is forced to shoot two strangers who try to ambush him in his sleep. Gillom is impressed, but his mother does not want him in her home.

Serepta, a girlfriend from his past also shows up to ask Books to marry her. He is not to happy when he learns that she wants to use his name to make money.

Books and Bond, begin to become friends and she seems to be truly upset when he tells her that he has little time left. Gillom, sells Books horse to give back to his mother the money she lost.

Later, Book asks Gillom to tell three bad men, Mike Sweeney, Jack Pulford and Jay Cobb, that they can find him in the morning at the Metropole saloon. In the shootout, will Books kill all of his opponents before he dies himself?

To add a sense of realism to John Wayne's character, archive footage from several of his westerns was used to introduce J.B. Books after the beginning credits. Included was footage from Red River (1948), Hondo (1953), Rio Bravo (1959) and El Dorado (1966).

When J.B. Books (John Wayne) arrives at Dr. E.W. Hostetler's (James Stewart) office, Hostetler mentions that it has been 15 years since they last saw each other. The inside joke is that Wayne and Stewart last worked together on The Man Who Shot Liberty Valance (1962), 15 years before.

John Wayne liked working with Lauren Bacall in their first film, Blood Alley (1955) so much that he hand-picked her as his leading lady for this film.