Beware of These Woman: Fiona Volpe. 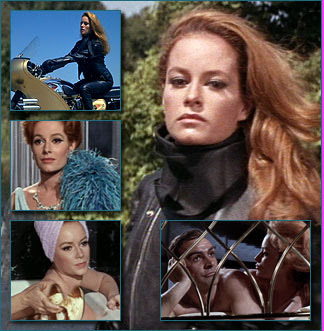 Fiona Volpe, who is played by Luciana Paluzzi, "Bad girl" character in the James Bond film, Thunderball(1965). Where she played the part of a assassin in SPECTRE's execution branch, Volpe is one of NATO pilot Major Francois Derval’s mistress, who is part of the plan to steal the Vulcan and two atomic bombs, which SPECTRE plans to use to blackmail the world. She plans Derval’s murder and destroys Lippe's car, with a missile launcher built into her motorcycle. Volpe, then pushes her motorcycle into a pond, to hide the evidence.

Bond meets Volpe, while hitchhiking in Nassau, and she catches his interest with her fast driving car. Later Fiona, captures agent Paula Caplan, but Caplan commits suicide by taking cyanide before sharing any information.

Meanwhile, Fiona waits for Bond in his bathtub and seduces him. While dressing for the Junkanoo, Volpe lets in Vargas and his henchmen to hold Bond captive. It does not take long before Bond escapes running through the crowds, but.. the killers are not far behind. Volpe walks up to Bond, dancing with another woman. Assuming Volpe is his wife, the woman leaves and they begin slow-dancing, while one of the henchmen hides behind a curtain and aims a gun. Bond sees him and spins Volpe around, which hits her in the back and kills her. Leaving Volpe's lifeless body in a chair with another couple says,("Would you look after my friend? She's just dead!"). 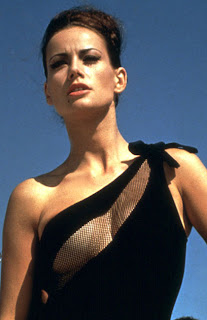 Luciana Paluzzi (born June 10, 1937 in Rome, Italy). Paluzzi's very first film was an uncredited part in, Three Coins in the Fountain (1954). In her early films, she is credited as Luciana Paoluzzi.

Bond, fans will always remember her best as the villainess she played in Thunderball. Paluzzi, first auditioned for the part of the lead Bond girl, Dominetta "Domino" Palazzi. The producers eventually cast a former Miss France, Claudine Auger, changing the Domino character from an Italian to a Frenchwoman and renaming her Dominique Derval. Heartbroken, when she learned she did not get the part, but.. the disappointment was short lived when she learned she landed the part of the "bad girl", Fiona Volpe, which she said was "more fun to play".

She was also second female lead in the Frankie Avalon and Annette Funicello comedy, Muscle Beach Party (1964) and played the love interest in the western, Chuka(1967). She also was the female lead in the science fiction film, The Green Slime(1968). In 1975, Paluzzi acted with fellow Bond girl Ursula Andress in the film, The Sensuous Nurse.

Please click here to view "And Then They Start Sparkling" blog page.
Posted by Dawn at 5:06 AM