Claude Rains (10 November 1889 – 30 May 1967), his career spanned over 47 years. Rains came relatively late to film acting, his distinctive voice won him the title role in, The Invisible Man (1933). Rains later credited director Michael Curtiz with teaching him, "what not to do in front of a camera".

Following The Invisible Man, Universal Studios tried to typecast him in horror films, but he broke free, starting with the role of Prince John in, The Adventures of Robin Hood (1938), then with his Academy Award-nominated performance as a corrupt senator in, Mr. Smith Goes to Washington (1939), and followed with probably his most famous role, the  French police Captain Renault in, Casablanca (1942).

Rains went on to perform in, Phantom of the Opera(1943). Bette Davis named him her favorite co-star, and they made four films together: Mr. Skeffington and Now, Voyager. 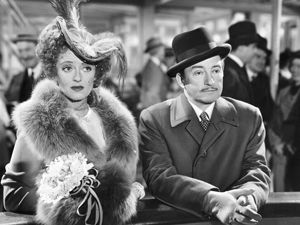 Next Rains, performed as, Julius Caesar in Caesar and Cleopatra (1945). He also played a refugee Nazi agent opposite Cary Grant and Ingrid Bergman in, Notorious (1946). He then performed in, The Passionate Friends(1949).

Rains remained a popular character actor in the 1950s and 1960 and performed in many films. Two of his well-known later screen roles were as Dryden, a cynical British diplomat in Lawrence of Arabia (1962) and King Herod in The Greatest Story Ever Told (1965), his final film role.

TCM is celebrating Claude Rains birthday with the films listed below: