“The Painted Lady” (1912) is one of the many silent short films D.W. Griffith directed at Biograph. In these primarily one-reelers, Griffith introduced many innovations into films like close-ups, cross-cutting and flashbacks. The story begins with a young woman, played by Blanche Sweet, who wants to find a beau, but she is shy and awkward. While the young men flock around her extravagantly dressed and heavily made up younger sister, played by Madge Kirby, they barely greet her at all. One day she meets a young man, played by Joseph Graybill, who assures her he likes her just the way she is and begins courting her. Unfortunately, the young man is only interested in her father’s money and goes to rob their home. At this point, the heroine gets a gun to confront the masked thief. 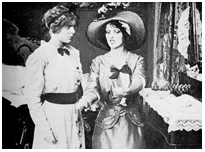 “The Painted Lady” (1912) is an incredible Biograph short that features Blanche Sweet, one of D.W. Griffith’s most popular female actresses at the time. In this film, Blanche actually creates a complex character, that of a young and repressed girl without suitors who is coerced into believing that only through the use of makeup will she attract a lover. Her performance is outstanding and quite modern for its time. Even though the camera doesn’t give extreme close-ups, Blanche’s face is so expressive that they weren't needed. Aside from being an early pioneer one-reel film with historical significance, I find “The Painted Lady” (1912) to be an effective drama almost one hundred years later. 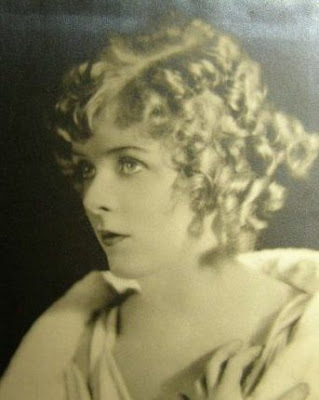 Born in Chicago on June 18, 1895, Sarah Blanche Sweet worked as a child actress, touring with stock companies, vaudeville, and appearing on Broadway. In 1909, Blanche made the transition to films, and by 1911 was playing heroines under the direction of D.W. Griffith. Griffith soon chose her to succeed Mary Pickford as his leading actress at Biograph, and under his guidance, Blanche helped revolutionize film acting. Compared with Griffith’s child-women, Mary Pickford and Mae Marsh, and his madonna, Lillian Gish, Blanche was a “take-charge” woman who, as the fearless telegraph operator, outwits the bandits in “The Lonedale Operator” (1911) and in “The Battle” (1911) shoves her cowardly lover into the fray. Her talents climaxed at Biograph with the landmark spectacle “Judith of Bethulia.” Made in 1913, the epic features Blanche as the Jewish heroine who saves her community from total destruction by seducing, then assassinating, the brutal Assyrian general, Holofernes. Although Blanche stayed with Griffith during his first year of independent production, in late 1914, she was lured away by a tempting offer from the Lasky Company that Griffith was unable to match. During her two-and-a-half-year stint with Lasky, she starred in nineteen feature films. Her last three films for Lasky were directed by Marshall Neilan, whom she married in 1922. In addition to her work with Neilan, she freelanced at other studios during this period. Thomas Ince made one of her finest films, “Anna Christie” (1923). Blanche finished her silent career with “The Woman in White” (1929). With the onset of sound, her opportunities in Hollywood were few and far between. She made three talkies in 1930. When her marriage to Neilan ended, she turned to vaudeville. Radio work and roles on the stage followed, including a featured part in the original Broadway production of “The Petrified Forest” with Humphrey Bogart and Leslie Howard. In 1936, Blanche married actor Raymond Hackett, and they worked in the theater together until they retired in the late 1940’s. When Hackett died in 1958, she moved to New York, where she became a fixture at events at the Museum of Modern Art. In 1971, film historian, Anthony Slide, screened “The Painted Lady” (1912) for Blanche at the Museum of Modern Art after a British film collector, John Cunningham, discovered a 35mm nitrate print of the film and made a 16mm print of it. From that moment on it became Blanche’s favorite Biograph appearance. Blanche Sweet died on September 6, 1986 at the age of 90 in New York City. 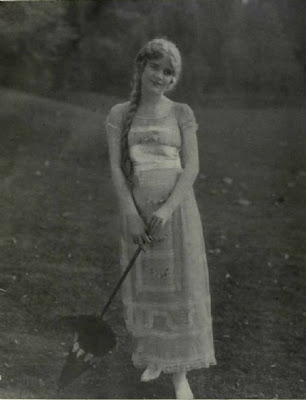 Posted by Silentfilmfanatic at 5:27 PM