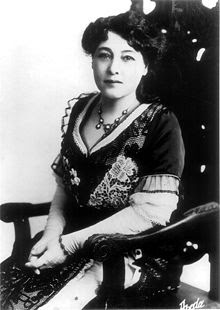 Alice Guy was hired by Leon Gaumont to work for a photography company as a secretary. The company soon went out of business, after which Gaumont began his own company that became a major force in the motion picture industry in France. Alice Guy decided to join the new Gaumont Film Company, a decision that led to a career in film making spanning more than twenty-five years and working on more than 700 films.

In 1906, she made the film, The Life of Christ.  She was one of the pioneers in the use of recordings in along with the images on screen in Gaumont's "Chronophone" system. An innovator, she used double exposure masking techniques and even running a film backwards.

In 1907 Alice Guy married Herbert Blache who was the production manager for Gaumont's  in the United States. After working with her husband, the two decided to go out on their own in 1910, partnering with George A. Magie for The Solax Company, the largest pre-Hollywood studio in America. With  their new company in Flushing, New York, her husband became production manager as well as cinematographer and Alice Guy-Blache worked as the artistic director. Within two years they had become so successful that they invested in production company in Fort Lee, New Jersey, which quickly became the film capital of America .

Alice Guy and her husband divorced with the decline of the East Coast film industry. Alice Guy-Blache went to work for William Randolph Hearst's International Film Service. She returned to France in 1922 and although she never made another film, for the next 30 years she gave lectures on film and wrote novels. In 1953 the government of France awarded her the Legion of Honor.