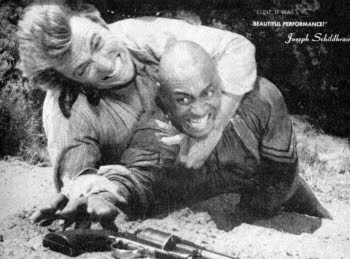 Woody Strode, was a decathlete and football star who went on to become a pioneering African-American film actor. He is probably best remembered for his brief Golden Globe-nominated role in Spartacus (1960). 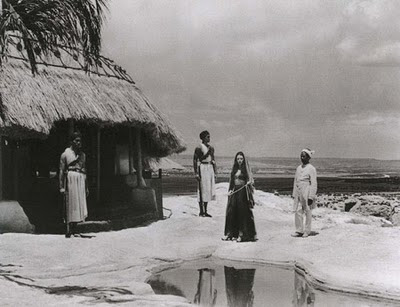 Strode made his first film performance in the film, in Sundown (1941). Playing on TCM: Saturday, August 14,2010. This film dedicated to the men who fought in World War II. George Sanders strictly by the book British officer who arrives to take over Bruce Cabot's desert outpost. Gene Tierney plays half Arab and half English woman who runs an international trading network . I enjoyed the great action scenes with Tierney and Sanders fighting Nazis in Africa in the middle of the tribe of gun runners. You will also see a very young Dorothy Dandridge. She is cast as a Muslim native girl married to a young warrior. She does not have much of a speaking role, but.. her emotions show how bad her life is in the village. Miklos Rozsa's score is perfect for this film. Best Black and White Art Direction (nom) Alexander Golitzen 1941 Academy, Best Black and White Cinematography (nom) Charles B. Lang 1941 Academy and Best Dramatic Score (nom) Miklos Rozsa 1941 Academy.

Woody Strode, became more active in the 1950s. He played dual roles (billed as "Woodrow Strode") in The Ten Commandments (1956) as an Ethiopian king as well as a slave, and in 1959 portrayed Private Franklin in Pork Chop Hill. He performed once on Johnny Weismuller's 1955-1956 television series, Jungle Jim.

Strode performed as villains opposite three screen Tarzans. Tarzan's Fight for Life(1958). He was cast opposite Jock Mahoney's Tarzan as both the dying leader of an unnamed Asian country and that leader's brother, Khan, in Tarzan's Three Challenges(1963). In the late 1960s, he performed in many episodes of the Tarzan television series.

He became a close friend of director John Ford, who gave him the title role in Sergeant Rutledge (1960). Shot on location in Monument Valley, Utah. The film starred Strode as a black first sergeant in the United States Cavalry accused of the rape and murder of a white girl at a U.S. Army fort in the late 1880s. His defense is handled by Lt. Tom Cantrel, Rutledge's troop officer. The story is told through a series of flashbacks, through the testimony of witnesses. Circumstantial evidence all points to, Sergeant Rutledge.

Strode performed in the films, The Last Voyage(1960), The Professionals(1966), Once Upon a Time in the West (1968). Soon after, he performed in many spaghetti Westerns. His starring role as Patrice Lumumba, in Seduto alla sua destra (released in the U.S. as Black Jesus), the film is largely forgotten now. He remained a popular actor throughout the '70s and '80s, and has become widely known as one of the important black film actors of his time. His last film was The Quick and the Dead (1995).
Posted by Dawn at 4:04 AM

Email ThisBlogThis!Share to TwitterShare to FacebookShare to Pinterest
Labels: summer under the stars 2010, woodie strode