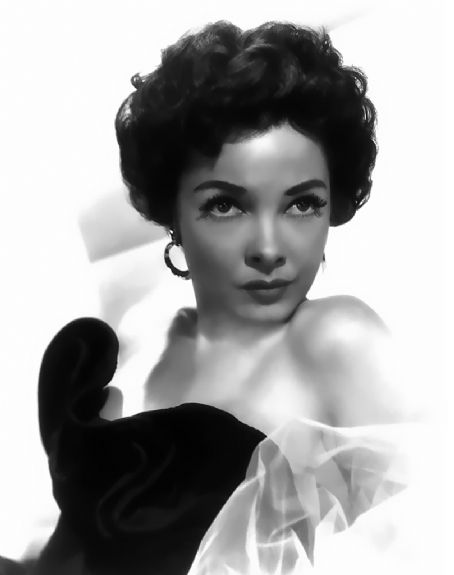 Kathryn Grayson, made her first film performance in, Andy Hardy's Private Secretary(1941). White House Girl(1941), Then she went on to perform in, Very Warm for May(1948) The Vanishing Virginian, Rio Rita, Seven Sweethearts and Thousands Cheer(1943).

In 1942 Grayson performed in An American Symphony with Judy Garland. Garland was replaced by June Allyson and the film was retitled Two Sisters from Boston and released in 1946.

From 1943 to 1945, she entertained the troops during the war and performing on radio programs. She return to films in Anchors Aweigh (1945). Musical comedy film directed by George Sidney in which two sailors go on a four-day shore leave in Hollywood, accompanied by music and song, meet an aspiring young singer and try to help her get an audition at MGM. It stars Frank Sinatra, Gene Kelly, Kathryn Grayson, José Iturbi, Pamela Britton, Dean Stockwell, and Sharon McManus.

MGM re-paired Grayson and Sinatra for two movies in 1947 and 1948, It Happened in Brooklyn and The Kissing Bandit. Later, Grayson was partnered with tenor Mario Lanza in two films, That Midnight Kiss(1949) and The Toast of New Orleans(1950), where she performed the Academy-Award-nominated song "Be My Love".

Grayson replaced June Allyson as the role of Ina Massine in 1951's Grounds for Marriage. She portrayed an opera singer with laryngitis, alongside Van Johnson who played her doctor and love interest. This was also first non-singing role at MGM.

Grayson was next cast as Magnolia Hawkes(1951) remake of the 1927 Hammerstein and Kern musical, Show Boat, alongside Howard Keel and Ava Gardner.

Grayson teamed again with Keel that year in one of my favorite musicals, Lovely to Look At(1952), a remake of the 1935 Astaire and Rogers film Roberta. Tony Naylor, Al Marsh and Jerry Ralby are looking for backers for their Broadway show. They have just run out of hope when Al gets a letter from his Aunt's attorneys and finds he is a part-owner of a dress shop in Paris. Wanting to sell his share, they all fly to Paris, only to find the shop is almost bankrupt. There they also find Stephanie and Clarisse, who own the other shares of the business. Tony is torn between Stephanie and how to finance the fashion show. The popular song "Smoke Gets in Your Eyes" is featured in this film.

After 11 years with Metro-Goldwyn-Mayer, Grayon's contract ended, and she went on to Warner Bros. Grayson's first musical with the studio was, The Desert Song.

Grayson performed on television in the 1950s, receiving an Emmy nomination in 1956 for her performance in the General Electric Theater episode Shadow on the Heart. In the 1980s, she guest starred in several episodes of Murder, She Wrote with Angela Lansbury.
Posted by Dawn at 4:04 AM

Email ThisBlogThis!Share to TwitterShare to FacebookShare to Pinterest
Labels: kathryn grayson, summer under the stars 2010