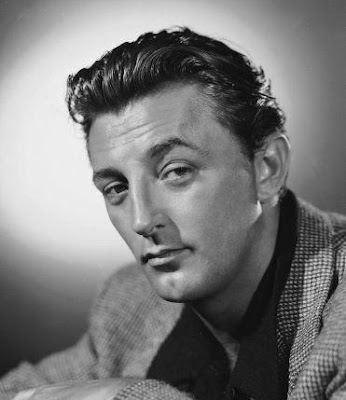 Robert Mitchum, began acting in a Long Beach, California, amateur theater company. Where he performed in small roles in films. In 1945, he was cast as Lt. Walker in Story of G.I. Joe (1945) and received an Oscar nomination as Best Supporting Actor.

He quickly became an icon of 1940's film noir, though equally performed well in westerns and romantic dramas.

In the 1950s, his brief prison term for smoking marijuana in 1949, seemed to help rather than hurt his "bad boy" image.

He is well known for his performance in the film, The Night of the Hunter (1955). Crime drama. Director: Charles Laughton. Cast: Robert Mitchum and Shelley Winters. The film is based on the true story and 1953 novel of the same name by Davis Grubb, adapted for the screen by James Agee and Laughton. 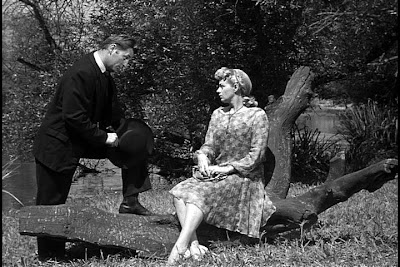 The film is set in West Virginia in the 1930's. Ben Harper is sentenced to hang for the robbery in which two men were killed. Before he is caught he hides the stolen money, trusting it to his son John. Reverend Harry Powell, a serial killer and self-called preacher with the words "LOVE" and "HATE" tattooed on his right and left hands, shares a prison cell with Harper. He tries to get Harper to tell him where he hid the money before his execution, but the only clue he gets is a Bible verse Harper says in his sleep: "And a little child shall lead them."

Believing that Harper told his children the secret, Powell marries Harper's widow, Willa. One night Willa overhears her husband questioning the children and she realizes the truth. Will she be able to protect her children from the so called... Reverend Harry Powell?

For me Night of the Hunter is one of the scariest films ever made. Mitchum gives an excellent performance. The suspense comes from the performance of the characters. Although, the film is warm and charming in parts. You'll remember this film for a long time.

Mitchum began performing on television in the 1980s, with "The Winds of War" (1983) and "War and Remembrance" (1988). His sons James Mitchum and Christopher Mitchum are actors, as is his grandson Bentley Mitchum. His last film was James Dean: Race with Destiny (1997) (TV).
Posted by Dawn at 3:38 AM