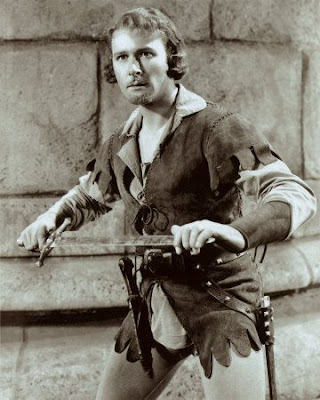 After a romantic moment with a beautiful woman, Don Juan barely escapes an angry husband, when he and his friend, Leporello, are stopped by soldiers keeping the road clear for a Spanish Duke. Trying to avoid the husband who is hot on his heels, Don Juan pretends to be the Duke, only to find out that he is expected to marry Lady Diana and so decides to play along. Don Juan and Leporello, are quickly arrested after the real Duke arrives and Don Juan is to be deported to Spain in disgrace for his royal punishment. Before Don Juan can leave England, the Spanish ambassador, asks if he would help stop the war between Spain and England. Next in my favorite scene, Once in Spain, they stop to have dinner at an inn. A group of Duke de Lorca's soldiers arrives and start to make trouble for the people in the town. After winning the sword fight with the soldiers, he is accepted by the people as a hero.

When Don Juan meets with Queen Margaret, she tells him that because he pretended to be the Duke, he disgraced the state. Also, he destroyed any possibility of a political marriage, that would have prevented the war, between England and Spain. But when Don Juan takes one look at the beautiful Queen Margaret, he promises to defend her throne and capture her heart.


FUN FACT:
At the end of the film, the young woman in the coach asking Don Juan for directions is Errol Flynn's wife, Nora Eddington.

I really enjoyed this film, the script is great with a lot of very funny lines. Flynn plays the part with a wonderful flair.

Email ThisBlogThis!Share to TwitterShare to FacebookShare to Pinterest
Labels: errol flynn, summer under the stars 2010