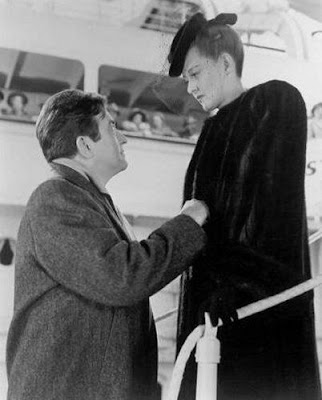 Deception (1946). Directed Irving Rapper. The film is based on the play Monsieur Lamberthier by Louis Verneuil. The screenplay was written by John Collier and Joseph Than. Cast: Bette Davis, Paul Henreid and Claude Rains who had also performed together in, Now, Voyager (1942).

After a long separation, pianist Christine Radcliffe is reunited in New York with her fiancee, cellist Karel Novak. When Karel wants to know how Christine can afford such a beautiful apartment and clothes, Christine says that she is giving music lessons. Soon Christine receives a call from composer Alexander Hollenius, whose mistress she has been, and informs him of her up coming marriage. Hollenius arrives at a party celebrating the marriage and tells Karel that he believes the marriage will interfere with Christine's music. The following day, Christine visits Hollenius and begs him not to reveal their relationship. Later, Karel visits Hollenius, to his surprise, he finds Hollenius listening to a recording that Karel made. Hollenius is impressed by Karel's talent and offers him a cello concerto that he has just written. When Christine hears Karel practicing Hollenius' concerto, she becomes convinced that Hollenius intends to use the concerto to destroy Karel. When Christine shares her fears to Karel, he demands to know why she is afraid that Hollenius will take the concerto away from him, but Christine still refuses to tell her husband the truth. The next day, Christine returns to Hollenius' apartment to beg him not to take out his anger on Karel, he tells her that his first duty is to his music and that he is sure Karel will perform well. As she leaves the apartment, Christine sees Bertram Gribble, the orchestra's first cellist, waiting in the foyer and is sure that Hollenius intends to replace Karel with Gribble. On the night of the performance, after Karel has left for the concert hall, Christine again visits Hollenius and begs him to promise that he will not tell Karel of their relationship and again when Hollenius refuses, what will Christine do to keep her secret?

If you're in the mood Bette Davis-Claude Rains melodrama, you have to add this film to your "gotta see" list. Rains has some of the cruelest and wittiest lines in this film. Bette matches him with her display of emotions. 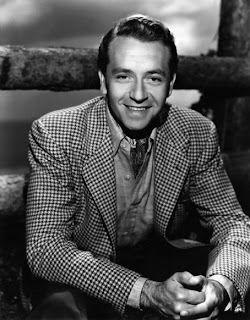 Paul Henreid, performed in his two most important films. In Now, Voyager(1942) and Casablanca(1942). He made regular film performances in the 1940s, and in the early 1950s began directing for both film and television. His film credits include The Spanish Main (1945), Of Human Bondage (1946), Song of Love (1947), Thief of Damascus (1952), Siren of Bagdad (1953), and Four Horsemen of the Apocalypse (1961). His television directorial credits include Alfred Hitchcock Presents, Maverick, Bonanza and The Big Valley. In 1964, Henreid directed Dead Ringer, which starred Bette Davis and featured, in a minor role, the director's daughter, Monika.
Posted by Dawn at 5:53 AM