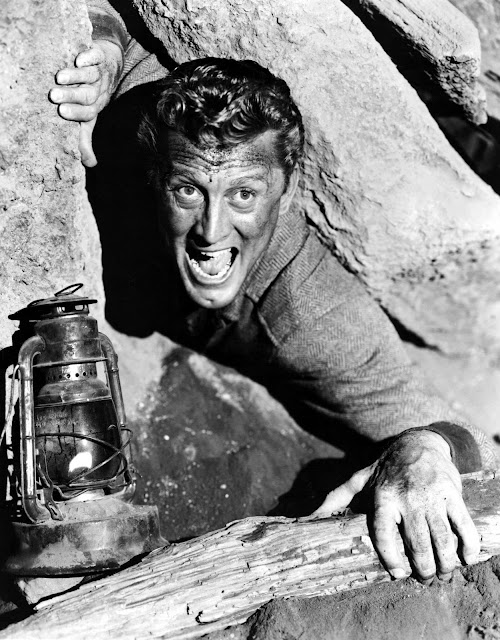 Ace in the Hole(1951). Cast: Kirk Douglas. This film marked a series of firsts for Billy Wilder: it was the first time he was involved in a project as a writer, producer, and director. His first film following his breakup with writing partner Charles Brackett, with whom he had worked on The Lost Weekend and Sunset Boulevard.

As reporter Chuck's car is being towed through Albuquerque, New Mexico he passes by the Sun Bulletin newspaper office, he decides to apply for a job. Boot offers him a job on condition he stay clean and sober. Chuck accepts Boot's terms, believing his next big break will soon come.

A year later, Chuck is still working at the Bulletin when Boot assigns him and Herbie Cook to cover a rattlesnake hunt. Herbie and Chuck stop for gas at a trading post and learn that Leo Minosa while looking for Indian artifacts, is trapped in a cave in a nearby Indian cliff dwelling. Chuck thinks that this maybe the BIG story he is looking for.

When he arrives Chuck goes into the cave and finds Leo, trapped under a heavy plank. While Chuck tries to comfort Leo he also takes a picture of him. He returns to the trading post and calls Boot and says that he has a front page story. Chuck then arranges an interview with Leo's wife Lorraine. He finds out she is planning on leaving Leo, Chuck, thinking that her leaving will hurt his story, he talks her into staying.

The next day, after Chuck's first story appears in the Bulletin , the trading post is over run by visitors. After hearing from Dr. Hilton, that Leo can survive a week in the cave, Chuck convinces the Sheriff to use his position to prolong the rescue.

As the rescue team begins drilling the next day, the area is flooded with reporters and tourists. Chuck tells Herbie that he is quitting the Bulletin . When other reporters complain about Chuck's position, the sheriff tells them that he has deputized Chuck and will not allow anyone else inside the cave for safety reasons. 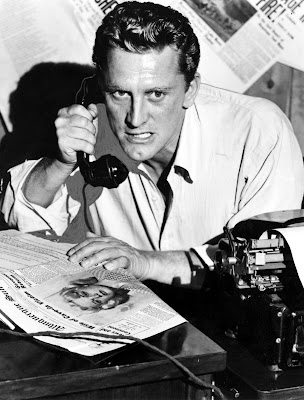 The hardest part of the movie for me is when Chuck goes in to reassure Leo and he calls him his best friend. At the trading post, Chuck runs into Boot, who says that he is on to him.. Will Chuck do the right thing before it is too late?

A wonderful performance by Kirk Douglas manipulating events at the expense of the victim seems inhuman, but Douglas' performance makes it believable.

The studio constructed a replica cliff dwelling at a cost of $30,000. The set was located behind the Lookout Point Trading Post on U.S. Route 66, west of Gallup, New Mexico. After filming was completed, the set was left intact and the owner of the trading post used it to draw tourists to his store.

Residents of Gallup, New Mexico were hired as extras. They were paid 75 cents an hour for a ten-hour day. Extras earned an additional three dollars if they could bring an automobile to the set. 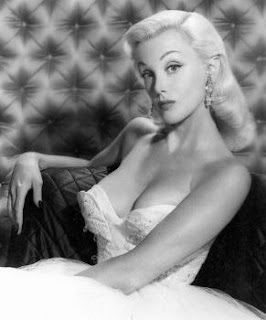 Jan Sterling, she made her film: Tycoon, billed as Jane Darian. Ruth Gordon insisted she change her stage name to Jan Sterling.

Often cast as harden characters, she played a more sympathetic character in the film, Sky Full of Moon (1952).

In 1950, she was cast as Ruth in the western series The Marshal of Gunsight Pass.

In 1954 Sterling was nominated for an Academy Award and won a Golden Globe Award for Best Supporting Actress for her performance in The High and the Mighty.

Later that year, she traveled to England to play the role of Julia in the first film version of George Orwell's 1984.

During the following years, she performed in movies, Slaughter on Tenth Avenue, Kathy O, and The Female Animal.

In 1963, she guest starred as Nurse Murdoch in the episode "Millions of Faces", Breaking Point. In 1967, she and Tisha Sterling performed in the episode "Eleven Miles to Eden" a western series, The Road West.

In late 1968, she began portraying the role of 'Miss Foss' in the soap opera, The Guiding Light.

She retired from films for the stage in 1969 and returned to television in 1979 in the miniseries Backstairs at the White House. 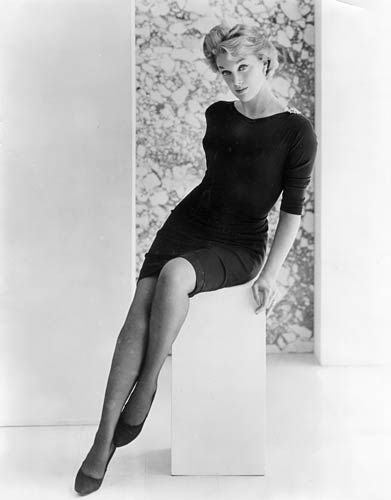 Email ThisBlogThis!Share to TwitterShare to FacebookShare to Pinterest
Labels: ace in the whole(1951), kirk douglas, the 50s