A Tribute to Evelyn Brent

Born Mary Elizabeth Riggs in Tampa, Florida, on October 20, 1899, to a fourteen-year- old Italian mother and a seventeen- year-old Irish American father, the actress had a miserable childhood. Her father died when she was three years old and her mother died and left her penniless at the age of fourteen.

Betty visited the studios at Fort Lee, New Jersey and began appearing as an extra, with her first credited role as Betty Riggs in Maurice Tourneur’s 1914 production of “The Pit.” Evelyn met Olga Petrova while appearing in the Metro production of “The Soul Market (1916). And Olga encouraged her career in film. The actress changed her name to Evelyn Brent with “The Lure of Heart’s Desire” in 1916 and the size of her roles gradually increased. By 1920, she had saved $500 and decided to visit Europe. Evelyn made her first British film, “The Shuttle of Life” opposite C. Aubrey Smith that year.


Evelyn alternated between film and stage work, and as a result of her British career, she returned to the United States as a “British Beauty” and a star.

Evelyn came to California for the first time and revived her American career with Metro’s Held to Answer (1923). Evelyn made thirteen films in Europe. Ten in Britain, two in The Netherlands and one in Spain. Trapped by the Mormons (1922) and its sequel was Evelyn’s worst film. Cool and beautiful, Evelyn seldom smiled. Evelyn was the archetypal gangster’s moll in her best films, Underworld (1927) and The Dragnet (1928), both directed by Josef von Sternberg. Evelyn was a favorite of the director, and he also cast her as the Russian Spy in The Last Command (1927) with Emil Jannings.

From 1926 to 1930, Evelyn was under contract to Paramount and was one of the stars of the studios first talkie, Interference (1929). She made 56 more films, with roles gradually getting smaller and the production quickly diminishing in importance and quality. 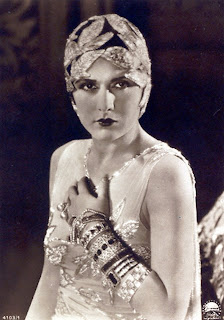 Aside from Underworld (1927) and The Last Command (1928), Evelyn’s best films were probably Blind Alleys (1927), The talkie, The Silver Horde (1928) and the talkie, Traveling Husbands (1931). Evelyn’s last film was Again Pioneers from Religious Film Associates in 1950. Evelyn died on June 4, 1975 in her small Westwood apartment.
Posted by Silentfilmfanatic at 3:58 AM