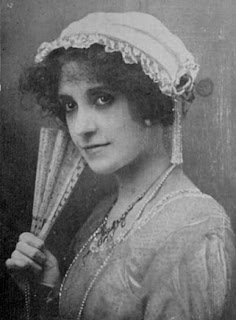 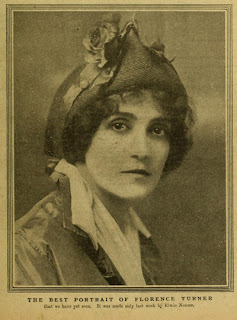 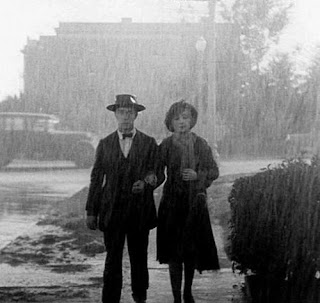 Born in New York on January 6, 1887, Florence Turner spent a number of  years on stage and in vaudeville before joining the Brooklyn-based Vitagraph Company in 1907.

At that time, she was hired not only as an actress, but also as a bookkeeper, pay clerk, accountant, and wardrobe woman. Florence starred in a vast number of one-reel short subjects, including  Shakespeare adaptations and Southern melodramas.

Florence was the sole performer in a 1911 short titled “Jealousy,” a study in the art of dramatic expression.  A year later Florence had consolidated her popularity by making the first personal appearance by a screen star at a movie theatre in Brooklyn. Florence was a little old for the title, but she was recognized as “The Vitagraph Girl.”

When Florence left Vitagraph in 1913, it was not to join another American producer, but to travel to England, where she set up her own production company with Vitagraph director, Larry Trimble. In all, she starred in more than 25 British films. The most prominent are the five-reel adaptation of Far From the Madding Crowd (1915) and My Old Dutch (1915). In 1916, Florence and Larry Trimble returned to the United States. In the three years she had been away, The American film industry had changed drastically, with many of the old producers fading away and the feature film replacing the short subject. There was really no room for Florence. Unfortunately, there were also changes in the British film industry. Production was hampered by a lack of funds and lack of public interest in British films. By 1924, the slump was such that all production ceased.

Small roles were all that were left for the pioneering  actress, usually those of the mother, as in the Buster Keaton vehicle College (1927). By the 1930’s, Florence was playing extra and early in the next decade, she entered the Motion Picture Country House, where she died on August 28, 1946.

Posted by Silentfilmfanatic at 4:21 AM