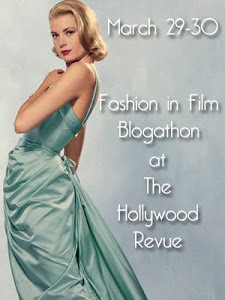 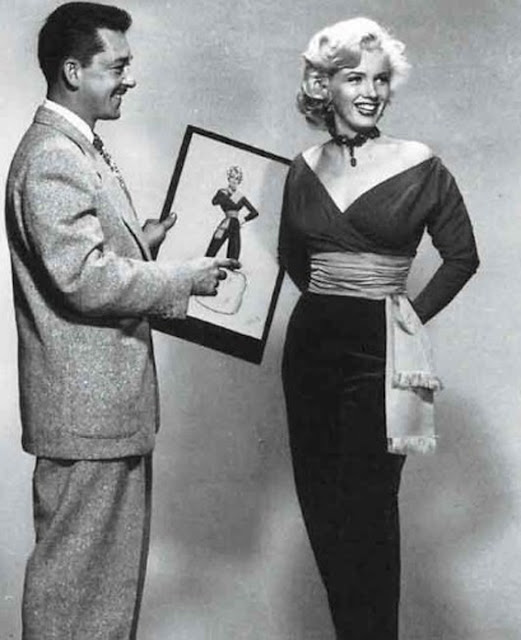 William Travilla (March 22, 1920 – November 2, 1990), was an American costume designer for theater, film and television. He maybe best known for dressing Marilyn Monroe in eight of her films. 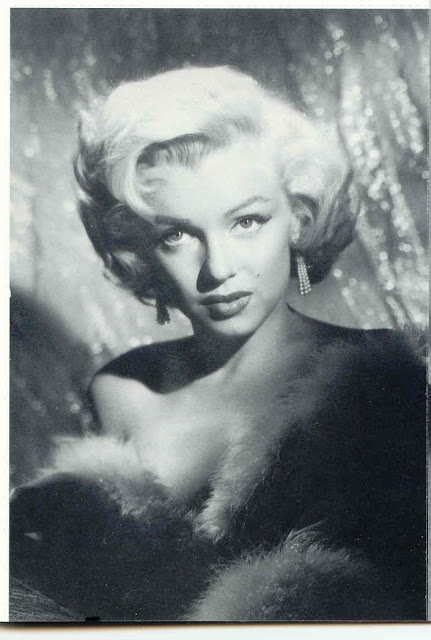 After working on several B movies, he worked his way to winning an Oscar in 1949 for the Errol Flynn swashbuckler, Adventures of Don Juan, and in 1951 designed the costumes in the classic sci-fi, The Day the Earth Stood Still. He then worked at Twentieth Century-Fox, where designed the costumes for the film, Viva Zapata!.

By 1952, he became good friends with Marilyn Monroe and created the costumes for: Don't Bother to Knock and Gentlemen Prefer Blondes. Travilla created one of the most famous costumes on the silver screen. The pleated white cocktail dress Monroe wore in the film, The Seven Year Itch(1955). 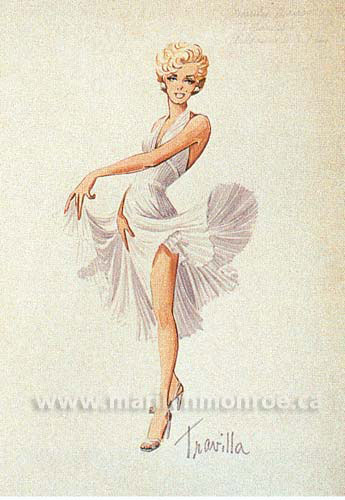 When Travilla began working with Marilyn in 1952 in Don't Bother to Knock, he was still one of the many costume designers of 20th Century Fox.

In 1955 he designed the white cocktail dress worn by Marilyn Monroe while his wife Dona Drake was on vacation. According to Dale McConathy and Diana Vreeland, Travilla did not design the dress, but bought it off the rack (although the costume designer always denied this claim).

The ivory cocktail dress, was a popular style of the 1950's and 1960's. The halter-like bodice was made of two pieces of softly pleated fabric that come together behind the neck, leaving the arms, shoulders and back bare. The dress fits closely to the waistline. A soft and narrow self belt was wrapped around the torso, criss-crossing in front and then tied into a small neat bow at the waist, at the front on the left side. Below the waistband is a softly pleated skirt which reaches to mid-calf or below the calf length. There is a zipper at the back of the bodice, and tiny buttons at the back of the halter.

In the film, the white dress appears in the sequence in which Marilyn Monroe and co-star Tom Ewell are leaving the Theatre, after just watching the 1954 horror film Creature from the Black Lagoon.

When they hear a subway train passing below the grate in the sidewalk, Monroe's character steps onto the grate saying "Ooo, do you feel the breeze from the subway?", as the wind blows the dress up exposing her legs.

Originally the scene had been scheduled to shoot on the street outside the Trans-Lux at 1:00 am on 15 September 1954. However, the presence of the actress and the cameras caught the curiosity of thousands of fans, so the director Billy Wilder was forced to reshoot on a set at 20th Century Fox.


After Monroe's death in 1962, Travilla kept the dress locked up with many of the costumes he had made over the years for the actress, to the point that for years there was talk of a "Lost Collection".

Monroe once wrote to Travilla, "Billy Dear, please dress me forever. I love you, Marilyn." 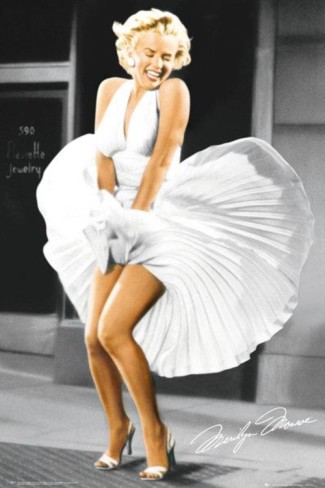 Travilla was  nominated for the Academy Award for How to Marry a Millionaire(1953), There's No Business Like Show Business(1954) and The Stripper(1963).

Travilla was nominated for Emmy awards seven times for his work on television.

Travilla died on November 2, 1990 in Los Angeles, California, of lung cancer. In 2008 an exhibition of the collection of William Travilla began in England, then came to Los Angeles and in 2009 to Palm Springs, California.

Please click on this link to see who else is participating in the "Fashion in film Blogathon". 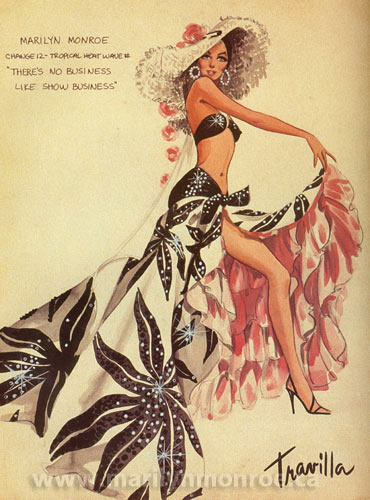