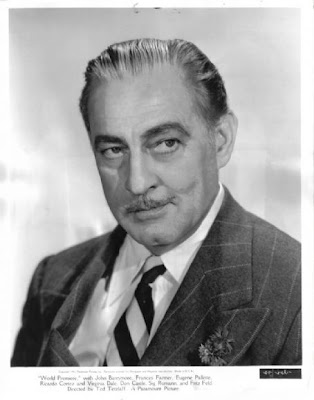 The story begins, when press agent Lulu Monahan, is trying to land her client actor John Barrymore, a job on Mr. Pennypacker's, popular radio show.  It turns out Pennypacker, is not interested in hiring Barrymore. So, Lulu comes up with a huge idea with the help of Peter Lindsey, to have Barrymore teach Shakespeare to Kay. Barrymore, does not really want to go with the plan until, the Internal Revenue Service comes looking for his back taxes. Lulu, promises him that it will lead to a big radio contract with Pennypacker. Lulu,  makes big promises, about a summer festival of Shakespearean plays starring Kay and Barrymore, Pennypacker's socialite wife, wanting to be part of the summer festival offers their Long Island estate.

Barrymore, then begins to tutor Kay when female bullfighter and former girl friend Carmen del Toro, drops by for a visit and wants all of  Barrymore's attention. Then, comes up with a plan to get rid of Kay, which backfires.

Just before the performance, Kay is recording his speech when he leaves the room for a moment. The recorder is still running when Barrymore and Lulu enter the room and Barrymore, tells her about a new plan to get rid of Kay.

When Kay replays the recording and hears about their plan, he decides to get even.  Kay, dresses up as the Grand Lama and tricks Barrymore, into revealing his plan, to spray Kay's throat, with an elixir that will prevent him from speaking. Then Ginny, insists on seeing the Grand Lama, who tells her two fortunes: one with an aging actor, the other with the young band leader.

On the day of the festival, Kay pours the elixir into Barrymore's champagne glass and refills the atomizer with  the elixir. After drinking a toast, Barrymore, takes the stage and is beginning to perform when he loses his voice and is booed off the stage.

Will Kay and his band, save the day with their modern version of Shakespeare, "Romeo Smith and Juliet Jones" ?

I felt Barrymore, worked very hard to make the most of his part in this film and there's a flash of his old talent sprinkled in along with some very bad jokes.. He performs Hamlet's To Be Or Not To Be, with a heart felt reading. 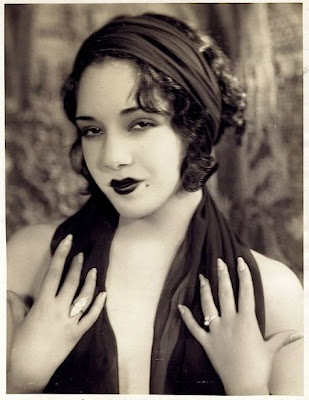 Lupe Velez (July 18, 1908 – December 14, 1944).  Her aggressive behavior with her ​​friends made her parents decide to send her to, Our Lady of the Lake in San Antonio, Texas, when she was 13 years old. Where she learned to speak English. After her 15th birthday and after the death of her father, Vélez left the convent and went to work in a warehouse as a clerk, earning four dollars a week. She took dancing lessons and in 1924, made her performing debut at the Teatro Principal in Mexico City, with the comedy ¡Ra-ta plan!.

In 1923 she moved to Texas, where she began dancing in vaudeville shows. A family friend, Frank Woodward, recommended Vélez to actor, Richard Bennett, who needed a young woman with the characteristics of Vélez for the stage play 'The Dove'. Vélez, did not get the part.

In California, she met the comedian Fanny Brice, who promoted her career as a dancer. When Lupe was about to move to New York for a stage play, she received a call from Harry Rapf, an official of the Metro-Goldwyn-Mayer, who offered her a screen test.

Hal Roach, producer and director of Pathé Pictures, saw the Lupe tests and hired her a role in the short film Sailors, Beware! with Oliver Hardy and Stan Laurel. Soon after, Vélez performed in another short film with Hal Roach, What Women Did for Me in 1927. Vélez's first feature-length film was The Gaucho (1927) starring Douglas Fairbanks.

Most of her early films cast her in exotic or ethnic roles (Hispanic, Native American, French, Russian, even Asian). It was not long before, Vélez made her second major film, Stand and Deliver (1928), in which she played a Greek peasant girl, for Cecil B. DeMilles.

Her next film, Lady of the Pavements (1929), was directed by D. W. Griffith and would be remembered for its image of the Smoking Dog Café. In the film, Vélez, sings for the first time, Irving Berlin songs.

She later performed in, The Wolf Song (1929), directed by Victor Fleming, opposite Gary Cooper. By the end of the silent era, Vélez was as popular as the"it girl" Clara Bow. She was named The Mexican "IT" Girl.

Vélez made her first all-talking picture, Tiger Rose in 1929. She also starred in Spanish-language versions of some of her movies.

Vélez performed in a series of Pre-Code movies: Hell Harbor , The Storm, and the crime drama East is West with Edward G. Robinson (1930).

In 1931 she worked with Cecil B. DeMille in the film Squaw Man and Resurrection. Vélez became typed cast to fiery supporting roles.

Next, she filmed Kongo, a second version of West of Zanzibar, with Walter Huston. In 1933, Vélez performed in, The Half-Naked Truth with Lee Tracy, for which she portrayed "Princess Exotica, posing as an escaped harem girl".

In 1933, she starred the comedy Hot Pepper, with Victor McLaglen and Edmund Lowe. This film is considered an installment in the series of films dating back to the silent film, What Price Glory? (1926), starring Lowe and McLaglen in their characters of Sergeant Harry Quirt and Captain Jim Flagg with Dolores Del Rio as the female costar.

The pair made a sequel to that film called The Cock-Eyed World (1929), costarring Lili Damita. She starred with Jimmy Durante in Palooka and Strictly Dynamite (both in 1934). That same year, Vélez filmed Laughing Boy with Ramón Novarro.  Novarro and Vélez were cast as Native Americans - a decision that doomed this film to failure even before it was begun.

Her battle with Laurel and Hardy in Hollywood Party is another enthusiastic Vélez performances. In 1934, Vélez was one of the victims of the "witch hunt" for "reds" in Hollywood. With Dolores del Río, Ramón Novarro and James Cagney, she was accused of promoting communism in California. The accusation arose after del Río, Novarro, Cagney and Vélez attend a special screening of the film Que viva Mexico! of Sergei M. Eisenstein which copies were claimed by Joseph Stalin from the Soviet Union to be edited.

Although Vélez was a popular actress, RKO Pictures did not renew her contract in 1934. Over the next few years, Vélez traveled from studio to studio; she also spent two years in England making films. In the England she filmed The Morals of Marcus and Gypsy Melody (1936). It was part of the producer Julius Hagen's film production. Hagen brought in Vélez, a leading Mexican actress, to give the her films greater international appeal. Vélez was now nearing 30 and had not become a major star. Disappointed, she left Hollywood for Broadway.

In New York, she landed a role in, You Never Know, a short-lived Cole Porter musical. Eventually, she participed in West End Revue with Greta Nissen. In 1937 she returned to Hollywood. She was featured in the final Wheeler and Woolsey comedy, High Flyers , doing impersonations of Katharine Hepburn, Simone Simon, Dolores del Río, Marlene Dietrich and Shirley Temple. Lupe Vélez was very popular with Spanish-speaking audiences.

She returned to Mexican films in 1938 starring in, La Zandunga (1938), directed by Fernando de Fuentes, with Arturo de Córdova.

Returning to Hollywood in 1939, she landed a leading part in the comedy for RKO Radio Pictures, The Girl from Mexico. She established such a rapport with co-star Leon Errol that RKO made a quick sequel, Mexican Spitfire, which became a very popular series.  The Spitfire films rejuvenated Vélez's career and for the next few years she starred in musical and comedy features for RKO, Universal Pictures, and Columbia Pictures in addition to the Spitfire films.

In one of her last films, Columbia's Redhead from Manhattan, she played dual roles. In 1941 she filmed Six Lessons from Madame La Zonga, again opposite Leon Errol.

In 1941, she filmed Playmates, the last movie of John Barrymore. In 1944, she returned to Mexican films starring in an adaptation of Émile Zola's novel Nana. Vélez career in the late thirties suffered from too many exotic roles.

In 1944 Vélez, wanted to return to Mexico, but she was overwhelmed by her many highly publicized affairs with: John Gilbert, Clark Gable, Charlie Chaplin, Erich Maria Remarque, Errol Flynn and Mexican actor Arturo de Córdova. One of Vélez more highly publicized relationship was with actor Gary Cooper. Vélez met Cooper during the filming of The Wolf Song, and began a two-year affair with him. Cooper was married at the time, and also having affairs with Clara Bow and Marlene Dietrich. 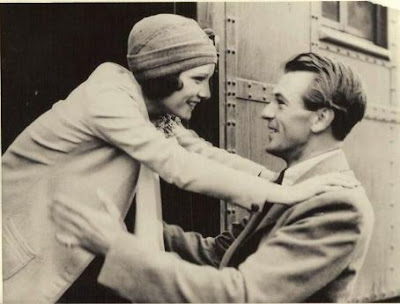 After her relationship with Cooper ended, Vélez married Olympic athlete Johnny Weissmuller (of Tarzan fame) in 1933. The marriage lasted five years; they repeatedly split and reunited several times before divorcing in 1939. 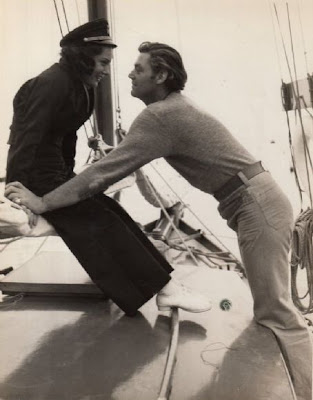 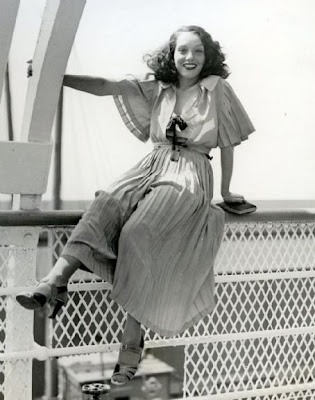 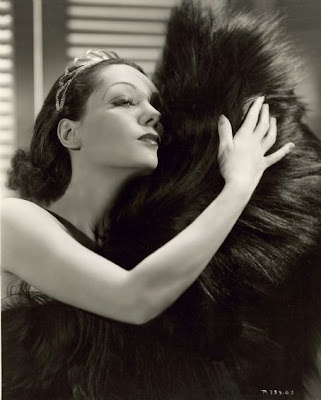