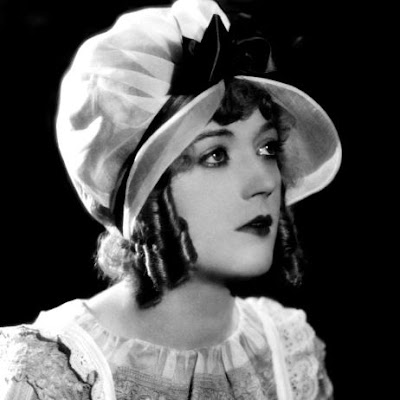 “Quality Street” (1927) is a silent comedy drama starring Marion Davies, Conrad Nagel and Helen Jerome Eddy. Based on the famous James M. Barrie play and directed by Sidney Franklin, “Quality Street” was a good showcase for Marion Davies. In this period story, Marion Davies plays Phoebe Throssel, a young woman who fails to land a proposal from her beloved, Dr. Valentine Brown, played by Conrad Nagel, before he leaves to the Napoleonic Wars. When he returns, Phoebe has become old and drab, and he is no longer interested in her. To punish him, Phoebe pretends to be her teenage niece Livvy in order to win him back. 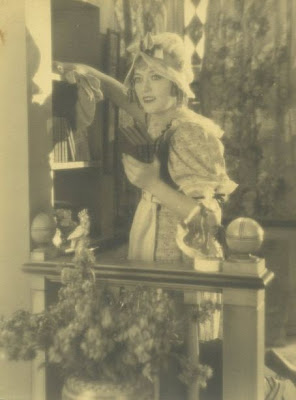 Even though I’m not a big fan of costume dramas, I enjoyed this film mainly for the screen presence of Marion Davies. It was as a comedienne that Marion truly lit up the screen, and in this comedy of manners she is wonderful in the dual roles of Phoebe and Livvy. I think this silent version of “Quality Street” is terrific in its costumes, sets, and cinematography. I just wish there were more scenes where Marion could show off her comic skills. Although the film has some nitrate decomposition in some scenes, it shouldn’t deter from its enjoyment.

Marion Davies was born Marion Cecilia Douras to a large Brooklyn family on January 3, 1897. All three of her sisters went on the stage but, despite their beauty, never became big stars. The Douras family (soon stage-named Davies) moved to Manhattan and little Marion began finding the theater more fascinating than school. It was during her run in the 1917 “Follies” that she caught the eye of the married, powerful newspaper publisher William Randolph Hearst. It was life-long love at first sight for the fifty-four-year old Hearst. Within a few years, Marion was as dedicated to him as any wife could be. The legal Mrs. Hearst, however, refused him a divorce. Marion had made her film debut in “Runaway, Romany” (1917). The reviews were good, and Marion seemed well on her way to becoming another Mabel Normand, but then Hearst stepped in to guide her career. His taste ran to overblown period films. Ironically, Marion was a brilliant comedienne with limited dramatic skills.

In 1919, Hearst formed Cosmopolitan Pictures, a subsidiary of Paramount, through which the films were released. In 1924, Cosmopolitan changed the affiliation to Goldwyn, and thereby to MGM when the studios merged. Among Marion’s more successful costume dramas were “Little Old New York” (1923), “Lights of Old Broadway” (1925), “Beverly of Graustark” (1926), “The Red Mill” (1927), and “Quality Street” (1927). Later in the decade, Marion was given a few opportunities to show off her comic skills in films like “The Patsy” (1928) where she did hilarious imitations of Mae Murray, Lillian Gish and Pola Negri. In “Her Cardboard Lover” (1928), Marion did a wicked parody of costar Jetta Goudal. “Show People” (1928) was Marion’s finest hour. She showed great comic timing and the rare opportunity to poke fun at both herself and her profession.

Despite her slight stammer, Marion had nothing to fear from talkies. It was the quality of her scripts which gave her trouble. Hearst did fall out with Louis B. Mayer, and in 1934, Marion, Hearst, and Cosmopolitan moved to Warner Brothers. That studio dolled her up in stiff platinum-blonde wigs and starred her in four films. Only “Cain and Mabel” (1936) with Clark Gable really had any merit. Marion had enough and at the age of forty retired. She spent the next fourteen years as Hearst’s wife in all but name. Despite Hearst’s constant efforts to keep her away from liquor, Marion was an alcoholic. Her looks and health began to fade, but not her charm. After Hearst’s death in 1951, Marion quickly wed old friend Captain Horace Brown, more for companionship than for love. The marriage was a stormy one, but it endured. After suffering from jaw cancer for three years, Marion died on September 22, 1961. She was 64 years old. 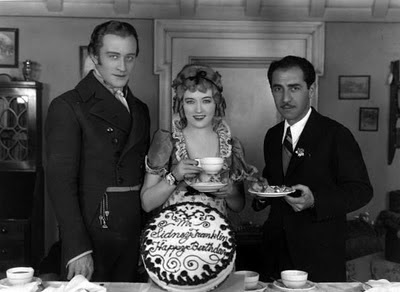 It’s interesting to note that Marion’s beloved “niece,” Patricia van Cleve Lake, died in her early seventies on October 3, 1993, in California. Shortly thereafter, her son Arthur Lake, Jr. (son of the late actor Arthur Lake), announced that his mother was the daughter of Marion Davies and William Randolph Hearst, born in Paris sometime in the early 1920’s.
Posted by Silentfilmfanatic at 3:54 PM