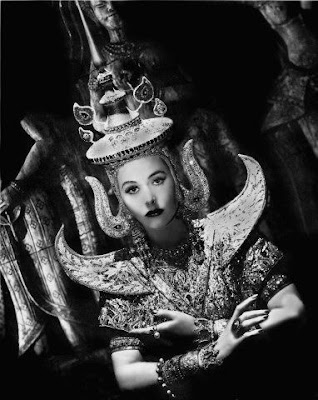 Bill Carey, arrives in Saigon by yacht owned by Alfred Z. Harrison, whose daughter Dolly, he plans to marry until he meets exotic Manon. Bill falls madly in love when they meet in a bar and look into each other eyes. Back on the yacht, Bill can not live without her and decides to jump ship so they can be reunited. In the past Manon, has been denied a passport because of her heritage. She sees Bill as her way out of Saigon, but she falls in love with Bill and wants to give up a planned marriage with a Asian nobleman.

Delaroch, who lives a very shady life, also wants Manon for himself and causes problems for Bill and Manon. His political power insures that he gets what he wants. To buy time Manon promises to marry him, even though she is going to marry Bill at the Mission, later that afternoon. Father Antione warns Bill about marring her, but Bill ignores his warnings about her being a very sly woman and marries her anyway.

Angry, Delaroch prevents Manon from leaving the country by ordering the governor to refuse her a passport. Soon they find themselves destitute, Manon arranges a job for her husband at one of Delaroch's rubber companies, in exchange for her company. On his way home, Bill learns the price that his wife has paid, when he reads an item from a society column, which mentions that Manon and Delaroch, had been seen at the opera together. At first Bill does not believe the society column, until Manon tells him that she has recieved her passport, he becomes enraged and promises to kill Delaroch. Will Manon and Bill have their revenge?

This is one of those black and white movies I wish were in color, the scenery was amazing. Hedy Lamarr, performance was wonderful as well as Robert Taylor's performance.. There is plenty of romance and plenty of drama in this film..
Posted by Dawn at 1:34 PM

Email ThisBlogThis!Share to TwitterShare to FacebookShare to Pinterest
Labels: hedy lamarr, lady of the tropics(1939), robert taylor, the 30s