"The Rage of Paris" (1938) is a delightful screwball comedy directed by Henry Koster that deserves to be more widely known. It stars the charming French film star Danielle Darrieux in her American debut and debonair leading man Douglas Fairbanks, Jr. The film starts with unemployed French model Nicole de Cortillon, played by Danielle Darrieux, coming to New York City to find a job. She applies for a nude modeling position but accidentally gets the addresses mixed up. When Nicole arrives at the wrong address she is told by the secretary to "make herself comfortable" until Mr. Trevor arrives. Nicole misunderstands the secretary and is in the process of taking off her clothes when businessman Jim Trevor, played by Douglas Fairbanks, Jr. enters the office. Although he looks somewhat amused, Jim thinks she is a trollop and orders her to leave. Desperate for money, Nicole returns to her boarding house where her best friend Gloria, played by Helen Broderick, lives. Gloria and her hotel headwaiter friend Mike, played by Mischa Auer, convince Nicole to try gold digging. They set up Nicole with a suite at the lavish hotel Mike works in to trap a millionaire. The man they decide to snare is Canadian millionaire Bill Duncan, played by Louis Hayward. The scheme works and Nicole and Bill become engaged. However, Bill's best friend happens to be Jim Trevor, the same man who saw Nicole undressing in his office just weeks before. Even though Jim tries to stop his best friend from marrying a gold digger, Bill agrees to marry Nicole anyway. At their engagement party, Jim kidnaps Nicole and takes her to his secluded country home. I think at this point fans of 1930's screwball comedies will know how this one will turn out. 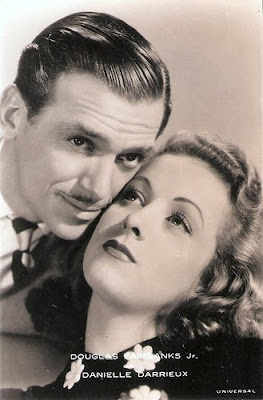 "The Rage of Paris" is fast-paced and very enjoyable to watch. The basis for the film's charm is in its lively dialogue and great performances. Darrieux demonstrates that she is a fine comedienne with captivating facial expressions. I found her thick French accent actually cute. Fairbanks, Jr. is excellent and very pleasing to watch. The supporting cast is simply top-notch. The glossy Art Deco sets and Darrieux's lavish wardrobe enhances the viewer's enjoyment of the film. What amazes me most about the film is that director Henry Koster was able to go as far towards risque as possible during Hollywood's Production Code era.
http://www.archive.org/details/RageofParis
Click to watch movie.
Posted by Silentfilmfanatic at 7:24 PM