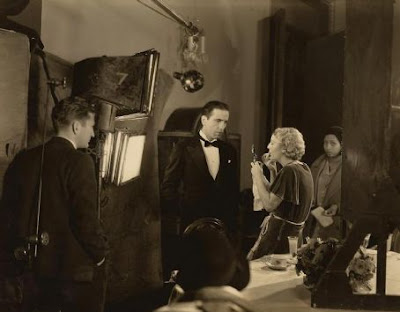 Based on a story by Ursula Parrott, this romantic/drama from Columbia Pictures was one of Humphrey Bogart's first leading roles.

Free spirit heiress Carol Owen (Dorothy Mackaill) decides to take flying lessons at Gilligan's flying school . Where she meets pilot Jim Leonard (Humphrey Bogart). While there she learns that he is giving up his job to work on a new plane motor .

Jim's has younger sister Linda Lee, who is a gold digger and is being kept in a beautiful apartment by wealthy broker Bruce Hardy. Linda Lee's is really in love with Georgie Keeler, a Broadway producer.

Carol is starting to fall for Jim and wants Hardy, to invest in Jim's motor company. Jim and Carol start to spend more time together, Jim has less time for his work. When Jim asks to her to marry him. Carol says "no", because she believes that she is preventing him from becoming successful . Hardy tells Carol that her father left her nothing and that she has been living off Hardy, her financial advisor. Carol is still determined to help Jim, and agrees to marry Hardy for his money. Hardy breaks it off with Linda Lee and gives her a check for $10,000. Jim reads in the newspaper of Carol and Hardy's engagement and refuses any more of Hardy's help. Linda Lee, wanting more money from Hardy, tells Jim that Hardy abandoned her even though he promised her marriage. Jim goes to see Hardy and he runs into Carol, who cannot bring herself to marry Hardy, and has come to break off the engagement. Carol believes that Jim is there to inform Hardy about their affair. She tells Hardy herself, and Jim tells them the real reason he is there. Hardy shows Jim the check he gave to Linda Lee, which she gave to Georgie. Upset to be tricked by his sister, Jim leaves. Carol is overwhelmed .
Will Jim realize he loves her before it is too late?


Dorothy Mackaill was a British-born American actress, most known for her performance in the silent film era and into the early 1930s.